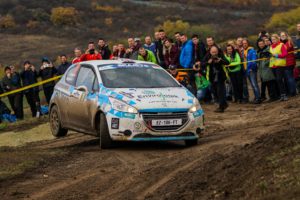 Nabila Tejpar’s hope of sealing the coveted FIA European Rally Championship Ladies Trophy was dashed as she rolled her Peugeot 208 R2 out of the event on the final day of Rally Hungary (8-10 November).

The Maldon based driver was within sight of taking the title when she was caught out on a tricky section of the tenth stage, sending the Peugeot into a tree and onto its roof. Both Tejpar and co-driver Hugo Magalhaes emerged unscathed from the incident, but the car was too badly damaged to continue, ending her dream on the spot.

Tejpar had enjoyed a buoyant season in the ERC and despite only contesting a handful of events in the calendar, was in-line to take the Ladies Trophy after picking up a significant points haul on each event contested. Wins in Poland and the Czech Republic boosted her chances but a solid result on the final round in Hungary would be required to bring the title back to her Essex home.

As a new round on the ERC tour, Rally Hungary would be visited for the first time by many crews and what lay ahead was unlike anything seen in the series before. Despite being billed as an asphalt rally, much of the stages would be covered in thick mud making the going treacherous and unpredictable.

With the added rain on the final day, it would prove to be one of the toughest Tejpar had ever encountered in her career and would need a cautious approach to ensure she could complete the rally unscathed. 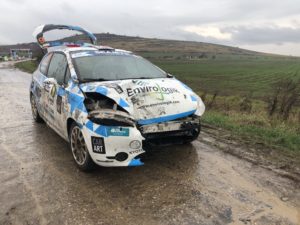 The event did not get off to the best of starts as the stage was stopped during her run and the following nominal time would see her over 10 seconds down on her nearest Ladies Trophy rival.

On the back foot for the first full day, Tejpar was eager to try and make up the unforced lost time but the muddy conditions would hamper progress up the leader board.

“It is really hard to get the confidence in the stages as it seems to have changed a lot since recce,” said Tejpar at the end of the opening day. “I don’t want to push too hard and make a mistake and although I’m second at the moment, it should be enough to do what we need to”.

However, the significant rainfall during Sunday’s final day made the stages even more difficult than previously and many crews would be caught out by the conditions. Sadly, Tejpar was one of them and on a fast left-hander the car hit water, aquaplaned and sent the car straight into a tree and onto its roof. Her title dreams were over.

“I just can’t believe it, I was so close,” said a devastated Tejpar.

“I’ve never seen road conditions like this on a rally before and I thought I`d got the measure of them. That stage in particular had claimed so many people but the whole rally was plagued by retirements due to the conditions. Sadly that one just caught me out and I was a passenger, there was nothing I could do.”

The stage was deemed too dangerous to run for a second time and was cancelled for crews later in the day. With the car back on its wheels, Tejpar had plenty of time to reflect on the missed opportunity.

“As a whole, the season has been great but when it mattered, I just ran out of luck. I really can’t focus too much on this situation right now, I know the title has gone for this year but I really must turn my attentions to 2020. It’s never too early to start planning and that’s what I need to be doing. I know there is plenty more to come in the future”.

Tejpar finished second in the ERC Ladies Trophy and will now look towards her 2020 plans over the closed season.