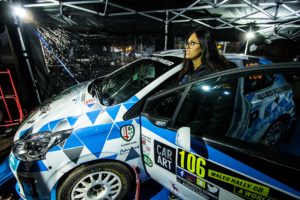 So near yet so far for Tejpar at Wales Rally GB

Reigning British Ladies Rally Champion Nabila Tejpar was forced to sit out her home round of the FIA World Rally Championship, due to her co-driver becoming ill on the run-up to last weekend’s Wales Rally GB (3-6 October).

The Essex based rally driver has been competing in the FIA European Rally Championship for much of the season but would head home to contest Britain’s round of the sport’s premier series which was based in Llandudno, North Wales.

Sadly, despite completing the pre-event recce to make their own pace notes, co-driver Richard Bliss would become ill overnight and with no replacement available, Tejpar would not be able to start the rally.

Tejpar has been at the forefront of the ERC Ladies Trophy in 2019, taking her Peugeot 208 R2 into the battle for the coveted honour. However, the gruelling three-day WRC qualifier was a huge draw for the 26-year-old and she had her sights set on a solid result in the forests of Wales. She would be joined by Bliss for the first time since 2017 as the pairing reunited for the event.

With stringent event rules laid down by the FIA, Tejpar would have to find a co-driver by the time the rally published its start list at 12pm and although there were offers of help from across the sport’s community, the deadline soon passed and she was forced to sit-out the prestigious event.

“Of course, I`m disappointed,” said Tejpar, “but Richard’s health has to come first, and he was really poorly during the night. It simply wouldn’t be safe to ask him to battle on and whilst we thought it may pass, it was soon clear that he wasn’t going to get better”.

However, Tejpar made the most of the weekend.

“Nothing beats being out there and competing on a World Championship event, but I think I managed to do the next best thing by being a guest commentator alongside Becs Williams on `WRC ALL LIVE` which was great fun” she mused.

“It’s how it goes sometimes. But on the plus side, it gives me more time to prepare for the next rally which is another WRC round. Pretty soon after that, I`ll be heading to Hungary to round out my ERC campaign so there is plenty to focus on.”

Tejpar will now head to Rally Spain at the end of October as she continues to build experience of the World Rally Championship tour. 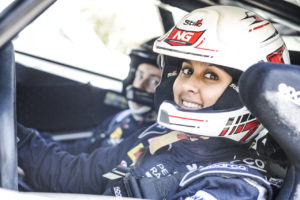