FIA European Rally Championship contender Nabila Tejpar will compete in the UK for the first time since April as she contests her home round of the FIA World Rally Championship, Wales Rally GB (3-6 October) next week.

Tejpar has spent much of the year battling for the ERC Ladies Trophy but will take time out of her programme to drive her Peugeot 208 R2 at the gruelling three-day WRC qualifier which is based in Llandudno, North Wales. Tejpar will also mark her return to the UK with her 2017 co-driver Richard Bliss joining her for the event.

Despite the Maldon based driver starting her 2019 season in the British Championship, she quickly expanded her plans to include the Peugeot Iberica Cup. But after sampling a round of the FIA ERC, Tejpar soon had her sights set on securing the Ladies Trophy and a solid finish in Poland launched her into the thick of the title fight.

A win in the Czech Republic followed for the progressive youngster, putting her at the heart of the championship battle as the season draws to a close. In the downtime, Tejpar has been able to lodge an entry to Wales Rally GB and contest one of the toughest events in the WRC calendar.

“It’s been a great season in the European Rally Championship but we had some time between rounds and it would be a real shame for all our supporters and backers if we couldn’t contest my home round of the World Rally Championship, so we made it happen” said Tejpar.

“I’ve competed in the event twice before so I really know what to expect but that doesn’t make Wales Rally GB any easier. Its one of the hardest events out there at the moment and just making it to the end of an event with over 300km on gravel is a real achievement”. 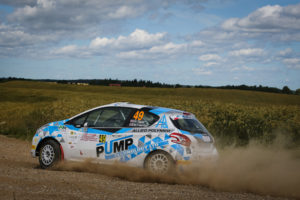 Tejpar has scored a top ten class result on the event, back in 2017 in her older Ford Fiesta R2. Last year’s attempt was blighted with gearbox failure in her Peugeot so a clean run and a better class result are on the cards.

“It’s going to be hard to have a great result this year as all the Junior WRC crews are in my class but as always I`ll be going out do my best and see how well we can do. I have the experience of the last two years behind me now so I`ll be drawing on all of that to help. It will be great to have Richard [Bliss] alongside again after competing here in 2017 together.”

Wales Rally GB kicks off with a Liverpool city centre start on Thursday evening before a spectator super special around the Oulton Park Race Circuit. Friday houses eight stages in North Wales whilst Saturday is the longest leg at 150km and based in Mid-Wales. Sunday rounds off the event, ahead of a Llandudno promenade finish celebration that afternoon.