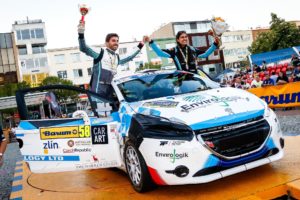 The Peugeot 208 R2 pilot enjoyed a close battle with fellow Ladies Trophy contenders, after leading on the opening day, a time-zapping off meant she was running in second place for the closing stages of the rally before putting in a blistering time over the final test to secure victory, taking maximum points for her ERC Ladies Trophy campaign in the process.

Despite not intending to mount an assault on the ERC this season, after sampling the championship for the first time at Rally Islas Canarias back in May, Tejpar elected to shift her focus from the Peugeot Iberica Cup and British Rally Championship to the prestigious European series.

A solid finish in Poland launched her into the thick of the title fight and the 26-year old would need to secure another strong result in the Czech Republic to cement her position as the popular event had attracted several other female contenders, all eager to scoop the honours.

Joining Tejpar for the very first time, Portuguese co-driver Hugo Magalhães stepped into the passenger seat and the newly founded pairing would need to work hard to stay ahead of the locals.

A blast through the super special spectator stage on Thursday evening was not indicative of the remainder of the rally, but Tejpar was happy enough with second fastest through the 10-kilometre Zlin test. 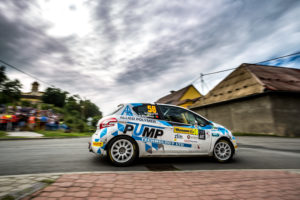 The rally offered a total of 220km of bumpy and broken public roads, with sections through forests offering an additional challenge thanks to their gravel nature. It took until stage three before Tejpar secured her first stage win, but her consistency saw her move into the ERC Ladies lead and despite a trip into a field on the final stage of the opening day, retained a 16 second lead into the second leg.

Drama struck on the opening stage on Sunday however, as an adventurous cut of a corner damaged the front of the Peugeot, losing Tejpar the lead in the process. She was 21 second behind heading into the closing stages, but a storming time through the 14th test saw Tejpar go 28 seconds quicker than her rival, regaining the lead and subsequently taking the win.

“That has to be one of the toughest asphalt events I think I’ve ever done and there was huge pressure on me during the closing stages today too,” said a delighted Tejpar.

“I never thought that I could take the win after being over twenty seconds away with just two stages to go. Its been a great battle this weekend but I didn’t make it easy for myself with a few mistakes. But I`m really pleased with how I managed to pull myself back from that and knuckle down to regain that lost time. It’s been a very rewarding weekend and the signs are looking good for the rest of the season.” 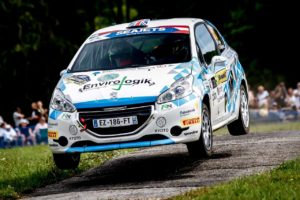 The next round of the series sees a shift back to gravel at the end of September for Rally Cyprus before the season rounds off in Hungary in November.