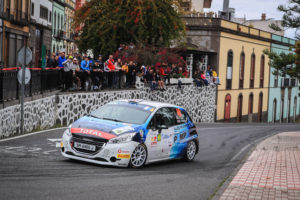 Nabila Tejpar will head to the Czech Republic for the first-time next week as she contests the Barum Czech Rally Zlin (16 -18 August), round six of the prestigious FIA European Rally Championship.

The Essex driver will make her return to the series for the first time since Rally Poland in June, after being forced to skip Rally Di Roma Capitale thanks to contesting the coveted Eifel Rallye Festival in a Proton Iriz R5. Tejpar will head to the event behind the wheel of her regular Peugeot 208 R2 and currently lies second in the ERC Ladies Trophy, just 11 points adrift of the top of the standings.

The 25-year-old British Ladies Champion has enjoyed a busy year on the European stages, contesting events in the Peugeot Iberica Cup, British Championship as well as embarking on a part-programme of events in the ERC. Outings have also included the recent Goodwood Festival of Speed for a BBC Breakfast feature and an invite to Germany for the Eifel Rally where she had the opportunity to drive a four-wheel-drive R5 specification machine for the first time.

But now, Tejpar’s attention turns to the European Rally Championship and she will make her debut in the Czech Republic to fight to regain the lead of the ERC Ladies Trophy. She will be joined by a new co-driver in the opposite seat, as the experienced Hugo Magalhães from Portugal steps into the frame.

“It feels like a very long time away from the championship but luckily I’ve not been out of the driver’s seat for long since Poland,” says Tejpar.

“There has been plenty going on and the chance to drive the Proton R5 in Germany was amazing, but I need to come back down to earth now and concentrate on the task ahead. Barum is certainly not going to be easy”. 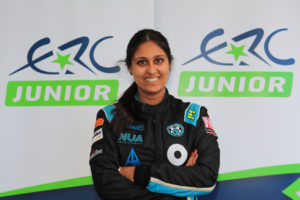 Ahead of her, 220km of flat out action await, spread across 15 special stages, each different in characteristics and style. The roads in the region, some 300km from Prague are notoriously bumpy and contain many sections of broken concrete and asphalt. Added to that, sections through the forests add an additional challenge with the often damp and slippery surface ready to catch the unwary.

“I’ve heard a lot about the stages there and I know it’s going to be one of the most difficult events of the year for me,” says Tejpar.

“But to be fair, most of the events have been tough as I haven’t had any experience of them before so I’m learning with every mile I drive. I think having Hugo alongside will help as he can bring his experience of the event and European roads to the team, he is extremely knowledgeable.”

Her focus remains on the ERC Ladies Trophy title and more valuable points for her campaign.

“I can’t contest all the remaining rounds, so I need to score well this weekend to keep my Trophy chances alive. It’s not going to be easy, as I`m the most inexperienced of the contenders but that won’t stop me trying for a win. I’m excited to see what happens”.