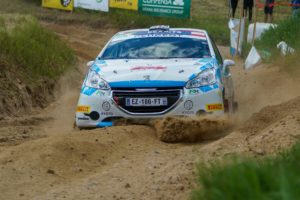 Tejpar made the decision to switch back to the European series after originally planning to tackle the Renties Ypres Rally as part of her British Rally Championship plans. After taking the top points haul in the Canaries on her ERC debut, Tejpar has sighted the Ladies title as a potentially significant milestone in her career and has considered adjusting her plans for the remainder of the season.

Despite each event on the calendar being new to the Maldon driver, Tejpar has been enjoying the challenge of fresh rallies and would head to Poland eager to broaden her experience of European events.

Over 200km of competitive driving would be on offer across gravel tracks in the region of Mikołajki three hours north of Warsaw. Fifteen stages would make up the three-day event, with the opening super special taking place on Friday evening. Eight tests would be packed into Saturday with the final leg housing six, before the podium celebrations back at the rally base.

Stages consisted of fast and flowing gravel roads through fields and countryside with un-sighted crests. The soft sand-like surface would make going difficult for the later running crews and Tejpar’s road order meant she would suffer some of the worst of those condition. So much so, that the large ruts would sometimes mean her Peugeot would be “surfing” along the stages.

However, she would be eager to learn the tests for the future and adopted a mature approach to the rally, ensuring she could complete the event and manage the risks associated with the tough roads. Her approach worked and as class rivals suffered in the hands of the stages, Tejpar completed the event to take maximum ERC Ladies points.

“It was such a surprise how difficult the roads would be here and I`m really delighted to make it to the end of this one,” she said.

“The ruts could have swallowed the car at times so it was more about damage limitation and getting to the end. It was a valuable lesson too though as it also highlighted the areas I need to work on for the future such as the faster sections on gravel.

A finish was important for my Ladies Trophy chances, it’s just a shame I didn’t have the competition here this weekend to battle with”.

Tejpar now looks ahead to Thursday (4th July) after accepting an invite to attend the iconic Goodwood Festival of Speed. Taking her Peugeot 208 R2, she will return to the Festival to display the car, as well as tackling the Forest Rally Stage during the weekend.

“I`m so excited for Goodwood,” she remarked.

“It’s a superb chance to showcase our car and sponsors too so many people and eager fans. It has a great atmosphere and the Stage is great fun too although we don’t take that too seriously. I look forward to seeing everyone there”.