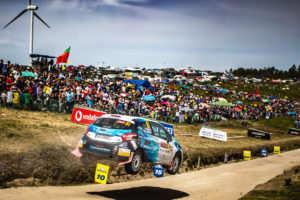 After taking the lead of the ERC Ladies Trophy on her debut event in the FIA European Rally Championship at Rally Islas Canarias, Essex rally driver Nabila Tejpar has announced she will return to the series for the PZM 76th Rally Poland (28-30 June).

Originally planning to tackle the Renties Ypres Rally as part of her British Rally Championship plans, Tejpar will make the switch to the ERC qualifier in a bid to hunt down the Ladies trophy title, despite missing a round due to her Peugeot Iberica Cup commitments.

The 25-year-old driver from Maldon has enjoyed competing across the UK and Europe during the past two seasons, contesting the British Rally Championship and Peugeot Iberica Cup in her Pump Technology backed Peugeot 208 R2.

A recent outing in the World Rally Championship was rewarded with a class podium and eager to broaden her experience of European events, Tejpar and co-driver Max Freeman will make a shift in their season plans to return to the FIA ERC.

Tejpar secured second lady driver home in the Canaries, but with a dedicated scoring system for two- and four-wheel drive machinery, Tejpar left the island in the lead of the series on her debut. 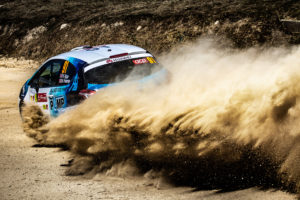 Missing the Latvian round, Tejpar now sits in second place, but re-joining for Rally Poland will see the title fight resume and she is excited to be returning to the prestigious championship.

“We had a bit of a nightmare in the Canaries as the 208 was incorrectly geared for the roads we were using but to be honest I still loved every minute of the ERC and I`m delighted to be able to come back again in Poland” she said.

“I really don’t have any previous experience there but I know the gravel stages are ultra-fast so fortune will certainly favour the brave. I`ll have to try and balance a good pace against the need for some solid points but I`m looking forward to battling with the other ladies in the series”.

She has no regrets in swapping her Belgium outing for the ERC qualifier.

“I really do enjoy the Ypres Rally, but I’ve done that event a few times now and I really feel this year is the right time to be gaining valuable experience of other events in Europe. Each one is so varied and has new challenges. I need to be sampling those challenges if I am to progress and that’s what it’s all about”.

Tejpar is just four points shy of the top of the ERC Ladies Trophy standings and is aiming to take the lead in Poland.

“I guess I’ve had a lack of competition in the British Championship so it’s great to be able to come and compete against other quick lady drivers here in Europe. It’s not going to be easy. But I’m looking forward to adapting to the event and the conditions and seeing how we get on.”

PZM 76th Rally Poland contains over 200km of competitive driving, spread across 15 stages from its rally base in Mikołajki, three hours north of Warsaw.