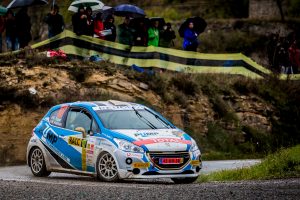 The 25-year-old managed to guide her Peugeot into 41st overall against the best drivers in the world and in the process, secure 13th place in the Peugeot Rally Cup Iberica which enjoyed its fifth round of the season during the opening seven stages of the event.

The Essex driver would head to her second WRC event of the month after securing a finish at her home round of the series, Wales Rally GB at the beginning of October.

The four-day Spanish event would provide the next instalment of the Iberica Cup and although the points would be counted after day two, Tejpar elected to continue in the full event to gain experience for the future.

Rally Spain offered a unique twist thanks to the mixed surface format, as the unforgiving stages changed from gravel to asphalt after Friday’s leg. Tejpar and co-driver Max Freeman would be looking to put in a strong performance on the gravel stages to secure points for the Cup, before being able to relax and enjoy the final two days on the twisty and super-quick asphalt tests.

The opening stage of the event blasted off around the streets of Barcelona under the cover of darkness on Thursday night, before the rally proper would get underway on Friday. Despite being fresh from the forest roads of Wales Rally GB, Tejpar would struggle during the opening leg due to the very different nature of the surface. 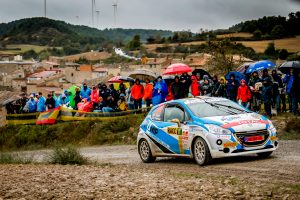 Loose and dry gravel meant a very different proposition from the wet of Wales and Tejpar struggled to find a pace that suited her driving. She finished the leg 18th overall in RC4 and subsequently the Iberica Cup in 13th spot.

Saturday saw the switch to asphalt but with it, treacherous conditions thanks to heavy rain through the night and morning. This made the rapid stages even more difficult thanks to the mud pulled out onto the roads by the leading crews. Without the pressure of the Iberica Cup, Tejpar could relax and enjoyed the opening loop of the day. However, a trip into a Vineyard that afternoon kept her outside of the top ten in RC4, finishing the day 11th.

The final day was much drier and Tejpar knuckled down over the final four tests of the event, taking tenth spot at the midpoint and holding her own to cross the finish ramp in Barcelona in a buoyant and relieved mood.

“I thought Wales Rally GB was tough but this has been just as difficult,” said Tejpar.

“It was probably a disadvantage to come straight from Rally GB to Spain as you had to change your driving style completely for the loose marbles on the gravel stages and to begin with I was trying to pitch it like a Welsh forest and it really didn’t work.

Once I dialled in it got better and the times started to improve, but just as that happened we had to change surface again. The tarmac was much better and I felt very much at home there, although it became difficult with the gravel that was pulled out. It was a tough event and I’m really pleased to have made it through the full event without using Rally2”.

Tejpar was happy with her overall performance during the weekend and believes it is all valuable experience for the future.

“The main reason we headed to the Iberica Cup was to push myself a little and gain experience of European events. They are all so very different to the UK. I know there is still more to come as well and that pace will come with more seat time in the Peugeot so the future is exciting for sure”.

She will now focus on the final round of the Iberica Cup, Rallye Casinos do Algarve in November,