Two for the price of one for Tejpar at Rally Spain 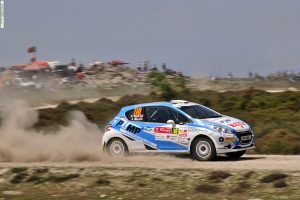 The unique event also forms the fifth and penultimate round of the Peugeot Rally Cup Iberica in which Tejpar has been competing, taking in events in Spain and Portugal in an ultra-competitive single make format. With all crews in identical specification machines, the competition has been intense all season and Tejpar has done well to secure a tenth place in two rounds of the series.

Tejpar, 25 from Maldon has also enjoyed outings in the Prestone MSA British Rally Championship which came to an end on the recent Dayinsure Wales Rally GB. As well as a round of the prestigious British series, it was also a World Rally Championship qualifier, offering a gruelling schedule and intense conditions. Despite suffering a cruel transmission failure on the second day of the rally, Tejpar was able to continue under the Rally2 format to finish the event and claim her second British Ladies title in as many years.

Just two weeks after her Rally GB result, Tejpar and co-driver Max Freeman will be heading to Salou for the penultimate round of the world tour and will be able to enjoy “two events in one” as the unforgiving format offers a change from gravel to asphalt during the weekend.

With the Iberica Cup points taken after the gravel leg on the opening day, Tejpar has elected to compete on the full WRC event meaning she will be able to contest the mountainous sealed surface stages without the pressure of a championship. Whilst her focus is on the championship, Tejpar is relishing the chance to have a go at another full World Rally Championship event.

“I have really been enjoying the Iberica Cup this season and the competition in the series is pretty intense,” says Tejpar.

“Of course, the main goal will be to grab valuable points for the season, or even try and sneak into a single-figure result but I`m also really relishing the chance to carry on and compete on the asphalt stages too.”

Tejpar is aware that her inexperience on the event will hamper progress somewhat but cites the Iberica Cup as a valuable tool in bidding for a strong result.

“Although I’ve never actually competed on those stages before, especially the opening Super Special Stage around Barcelona, my season in the Iberica Cup has really helped me get a feel of the roads in Spain and that will be valuable on the asphalt for sure. Most of the roads are wide and smooth but that can really lull you into a false sense of security so I`ll need to have a good recce to get the pace notes just right.

I’m quietly confident though and I`d like to see where we are against the WRC3 contenders (in her class) after Saturday night. I can then make the decision of how to approach Sunday’s stages but either way it’s going to be a great rally.