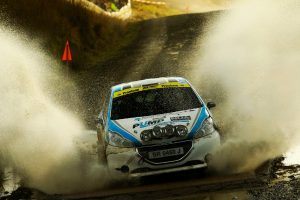 Despite suffering transmission failure on the third day Tejpar, 25 from Maldon in Essex managed to guide her Peugeot 208 R2 to 43rd overall and eighth RC4 in the rally which also formed the final two rounds of the BRC. Her result over both points scoring opportunities during the weekend ensured she could claim her second Ladies title in as many years.

Taking a break from her Peugeot Rally Cup Iberica campaign in Spain and Portugal, Tejpar and co-driver Max Freeman returned to the British Championship to take on one of the most demanding events in the World Rally calendar. Around 320 kilometres of competitive driving, spread across 23 stages lay ahead. With a difficult route, new stages and inclement weather to deal with, Tejpar would need to be at the top of her game if she was to net success on the World stage.

One eye was also on the BRC Junior category and Tejpar was eager to see if she could gain a decent points haul on the final rounds of the season. Points would be allocated after Friday’s stages and the second chance would come after the completion of the event on Sunday.

The rally kicked off with a short, sharp but entertaining blast around Tir Prince on Thursday night in front of a sizeable crowd near the north Wales coast. The rally proper would get underway on Friday with a difficult leg in store for the crews. Rain and fog would ensure the stages were just as treacherous as usual and Tejpar would aim for car conservation throughout the opening day.

The Peugeot driver was pleased with her progress on the “tougher” day of the rally despite the stages rutting badly for the later crews. Sadly a stall on the final stage of the day lost her a chunk of time to her rivals but the intention was to certainly regain that on the smoother stages on Saturday. 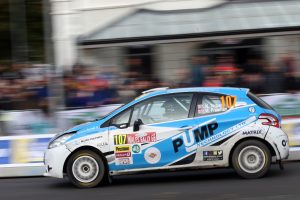 A gritty drive throughout the day would ensure Tejpar began to make inroads on her position and as the confidence began to build, the stage times tumbled. Sadly transmission failure on the penultimate stage of the leg sidelined the 208 on the Dyfi test. Thankfully, the Melvyn Evans Motorsport team were able to replace the unit overnight, ensuring she was able to rejoin the event under Rally2 regulations on Sunday for the final leg.

Just five stages remained and with nothing to gain, Tejpar was able to relax and enjoy the final leg of the event in front of her home crowd, bringing the Peugeot to her second Wales Rally GB finish.

“It was certainly as challenging as I anticipated and It didn’t really go my way this year,” said Tejpar.

“But it was yet another amazing experience and its always great to compete alongside the best drivers in the world, even if they don’t leave the roads in the best conditions for you. Of course, it was great to wrap up another BRC Ladies title too. We had a lot of things thrown at us this year and the stages were as tough as ever on Friday thanks to the weather. I was looking forward to the Saturday stages so when the gearbox went it was really disappointing”.

Tejpar continues to build experience of world-class stages for the future and sees her Wales Rally GB efforts as a critical part of that process.

“The challenges you face on a rally of this size really do help to make you stronger in the long run. If it was easy, everyone would do it wouldn’t they? There is nothing like the feeling of competing in a WRC event and you really need to be at the top of your game to do well. Ultimately I’m happy with how the weekend went and I know where my weaknesses are so I know what I need to do to improve. It’s been a very long week so I’m delighted to have made it to the end.”

Tejpar will now turn her attention to the next round of the World Rally Championship, RACC Rally Spain which also forms a round of the Peugeot Rally Cup Iberica at the end of the month.