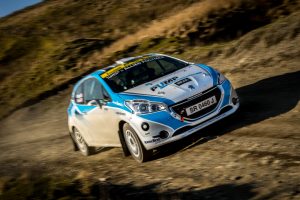 Essex rally driver Nabila Tejpar will round off her Prestone MSA British Rally Championship campaign with one of the toughest events on the rallying calendar, as the series concludes at the FIA World Rally Championship qualifier, The Dayinsure Wales Rally GB (4th -7th October).

The reigning British Ladies Champion will pilot her Peugeot 208 R2 in the gruelling four-day event which will see some of the best drivers in the world tackle around 320 kilometres of competitive driving. It will mark Tejpar’s second attempt at the rally, having overcome numerous mechanical difficulties to finish 11th in the RC4 class at last years event behind the wheel of her Ford Fiesta R2.

Tejpar, 25 from Maldon has enjoyed a packed competitive season so far, complimenting her British Rally Championship campaign with an assault on the Peugeot Rally Cup Iberica in a PT Racing Peugeot 208. The series is based in Spain and Portugal and Tejpar headed to the single-make formula in 2018 to build her experience of overseas events and gain valuable seat-time for the future.

And Tejpar will need to draw on all of her previous experience behind the wheel next week as she embarks on the arduous Wales Rally GB, spread across four days and 23 stages in the forests of Wales. Despite only her third season in the British Championship, Tejpar now faces one of the biggest tests of modern-day rallying and is aiming to secure a decent position in the Junior category of the BRC.

For the first time since 2008, the British Championship will utilise Britain’s round of the WRC to round off the season and the event will be split into two for contenders, offering a double points scoring opportunity. Tejpar, who will be co-driven by Max Freeman, is looking forward to the challenge ahead and is well aware of how difficult the rally can be.

“This will be my second attempt at Wales Rally GB and from last year’s experience, I know how tough it is just to finish the event,” says Tejpar. 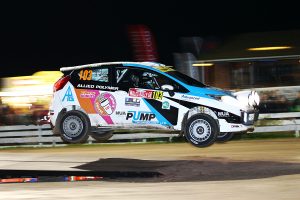 “My ethos all year has been to build on my pace and push that little bit harder on every rally, but I do need to approach next week with a different mindset. It can be a huge achievement just to make it to the end of each day and when you look at the mileage of the events I have done so far this year, It’s almost 3 or 4 of those rolled into one. Car conservation will be a very important factor so we need to look after the Peugeot as much as possible.”

Whilst Tejpar knows that the event is considered one of the most difficult in the World Championships, she feels she is ready for the task ahead and has realistic expectations for her result.

“I can use last years experience of the rally and my Rally Portugal assault earlier in the season as a great benchmark for the week. There is the chance of a really good Junior BRC result but I`ll need to balance the desire for some decent points with the fact that this really is a marathon and not a sprint. I`ll be playing my joker card which offers bonus points too so it really would be great to end the season on a high. But this is Wales Rally GB and I need to be the very best I can be to get through it. It’s a huge challenge.

“It’s three very long and hard days and nights rallying in what will undoubtedly be tough conditions in the forests. But the approach will not be too dissimilar to the way I have tackled the BRC this season. Doing my own thing at my own pace will be key and I have my sights set firmly on a finish.”

The Dayinsure Wales Rally GB is based at the Toyota plant in Deeside on the Wales border. After two days of pre-event reconnaissance, Thursday 4th hosts’ shakedown and the opening Super Special Stage at Tir Prince.

Friday 5th takes crews into North Wales whilst Saturday houses the longest day of the event in Mid Wales.  Sunday rounds off the event with just five stages, including a blast around the streets of Llandudno before the champagne celebrations on the Promenade.