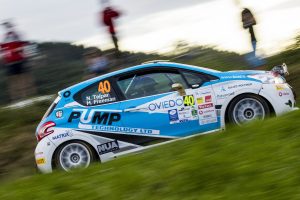 Nabila Tejpar came close to retiring from Rally Princesa de Asturias within sight of the finish last weekend (14th/15th September), as clutch failure blighted her PT Racing Peugeot 208 R2 on the final stage of the rally.

The Maldon based rally driver had worked hard to overcome a damage inducing puncture on the opening leg of the Spanish event but was faced with an ailing car over the closing stages of the rally.

With the help of rally fans and good fortune, Tejpar was able to creep over the finish line in La Manjoya to maintain her one hundred per cent finishing record in the hotly contested single make championship, finishing tenth overall in the Cup.

With regular co-driver Richard Bliss unavailable, co-driver Max Freeman stepped into the passenger seat for the tough north coast event which offered over 109km of special stage action spread across 12 stages. The newly formed duo would need to adapt quickly as there was little time for a pre-event test ahead of the fourth round of the series.

Fresh from a fifth place in the Prestone MSA British Rally Championship Junior category in Ulster, Tejpar would head back out to mainland Europe with the goal of continuing to gain additional seat time and experience of overseas events whilst looking to improve on her season-best tenth place on Rallye de Ferrol earlier in the year.

The 25-year-old Essex pilot was in a confident mood after crossing the ceremonial start in La Manjoya to a packed crowd, before four stages opened proceedings on Friday afternoon and into dusk. Despite a good start, disaster struck on the second test when Tejpar took bigger cut in the road than was required and clipped a rock part way through the 15km stage.

The impending puncture caused significant damage to the left-hand front wheel and with the tyre attempting to part company from the rim, the surrounding bodywork had become detached and Tejpar would lose over seven minutes to the leaders. Thankfully, a new wheel was duly fitted, and she was able to continue, completing the remaining two stages of the day to end the leg in 13th spot.

Saturday provided seven stages and the bulk of the event’s mileage with only the final spectator stage of the day under 15 kilometres in length. As the day progressed, Tejpar would feel more at home in the 208 R2 and set a string of confidence boosting times.

Yet again, drama struck on the short 3km town centre and final spectator stage. In sight of the finish, the clutch exploded which sidelined the Peugeot in a hairpin. A tense few moments followed as Tejpar struggled to get going and find a gear to enable her to continue. With the help of marshals and spectators, they bump-started the 208 to finish of the stage to record a time and finish the event. 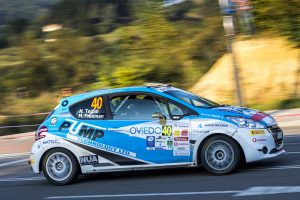 “I really didn’t think we were going to make that one” said Tejpar at the finish.

“It was a really tense time in the car as I could almost see the finish from where we were and that really would have been heart-breaking. We had a big delay going into the stage, so I don’t know if it overheated but it just went with a bang and I thought it was game over.”

Having lost a chunk of time on the opening day, Tejpar was pleased just to grab another top ten Iberica Cup finish.

“I came here with the intention of getting a season-best result but that was scuppered with Friday’s puncture so all that was left was to keep pushing as hard as I could on Saturday. The morning’s stages felt really good, but I struggled a bit in the afternoon, so the transmission issue really didn’t help things. But it’s another finish in the bag and valuable seat time too so it all helps towards the future”.

Tejpar will now focus on her return to the British Championship as she tackles the final double-header round of the series and Britain’s round of the FIA World Rally Championship, the Dayinsure Wales Rally GB in October.